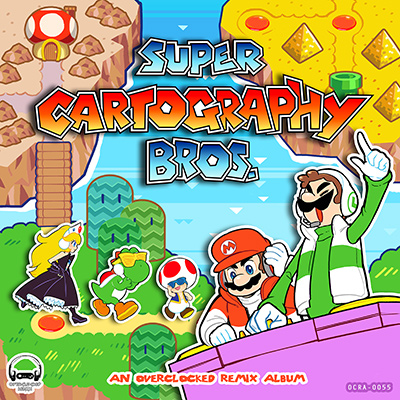 World (Map) Music to Dance To

Inspired by the map themes of the Super Mario series, Super Cartography Bros. is the 55th FREE community arrangement album from OverClocked ReMix. It features seventeen arrangements from fifteen artists with an EDM focus alongside artwork by Maya "rnn" Petersen, and was published on November 30th, 2015.

Accompanying the main Radio Edit version of the album are the Club Edit version, as well as a non-stop DJ Mixed version edited by Aaron "Global-Trance" Wu.

Putting Mario on the Map

I'm in the somewhat unique position of being invested in several different communities that all appreciate great video game music, so, for this invite-only project, I reached out to a lot of incredibly talented people. Many of these faces are well-known around OCR, but a few of them make their OCR debuts on this album. Thanks to friends from not only OCR, but also GameChops, RadioSEGA, the Nerdcore VPC group, and more, this is a well-stocked roster of ReMixers! Please make sure you check each one of them out individually, as they're all well worth following.

Some notes on the direction process: To ensure continuity, yet make sure each artist's unique sound shone, I made sure songs were submitted as unmastered files, and then I mastered everything myself. I decided to have each artist submit a club-length version of their song as well as a condensed, "radio-length" version. This way, all the OCR listeners who would rather not listen to a minute or so of stripped-down song (as is traditional to have in a club-friendly track) before the meat of the track hits aren't left out in the cold. Of course, the DJ-friendly version had to be included on an album like this as well.

There's also a third set of songs included in this download, and that is the DJ-mixed version -- I had my good friend and fellow DJ Global-Trance, real name Aaron Wu, turn in a continuous mix set of all the songs together. That mix is available as a single continuous file, but also cut up to be easily playable as skippable MP3s or FLAC files. By doing this, I wanted to ensure that this free release through a video game music website mirrored the quality of many high profile releases from EDM record labels around the world, which often include both full-length and DJ-mixed versions of the album. Heck, by including the radio edits, I've managed to cover a base that those labels usually miss! Never let it be said that OCR doesn't cater to a wide range of listeners.

Overall, this was a real labor of love, but what sort of fan-made arrangement album ISN'T? I've been playing these songs in my car and in my DJ sets for nearly a year, and I can't believe how well it turned out. I hope that you find this release as enjoyable to consume as it was to produce!

Downloading the album using BitTorrent is the best option - it helps us save bandwidth and gives you the option of downloading MP3, lossless FLAC files, or both by selecting which files to grab in your BitTorrent client.

02 - Where the Wild Things Are

Founded in 1999, OverClocked ReMix is an organization dedicated to the appreciation and promotion of video game music as an art form. Its primary focus is ocremix.org, a website featuring thousands of free fan arrangements, information on game music and composers, resources for aspiring artists, and a thriving community of video game music fans.